Sisters Akousmatica is the collaborative and expanded radio project of Julia Drouhin and Phillipa Stafford.

Sisters Akousmatica create curatorial, artistic and written projects which are concerned with collective radio practices, auditory-spatial exploration and the potential of emergent art forms to support, promote and cultivate socio-cultural and gender minorities in the field of sound arts.

Inspired by the radical possibilities of radio and the embodiment of its porosity, Sisters Akousmatica produced large-scale public transmission projects, retreat for women and non-binary artists, written research, workshops and commissions with organisations such as Mona Foma festival, Liquid Architecture, Next Wave festival, Hobiennale, ACCA, The Channel, Signal, Vitalstatistix (Adhocracy 2017), Radiophrenia, RealTime, Doing Feminism/Sharing the world, supported by Australia Council for the Arts and Arts Tasmania.

Sisters Akousmatica and 3CR were awarded the CBAA Excellence in Music Programming award at the 2017 Community Broadcasting Association of Australia.

Exploring the akousmatic nature of a voice divorced from its source, they are seeking the truth of herstory through investigations of hidden radio broadcasts, communities and person-to-person communications.

They believe in the power of active listening and unpredictable realm of invisible signals that is radio to excite imagination and social change, questioning senses of hearkening the world.

They position electromagnetic frequencies in a network of active and passive participants to establish an ecology of sound and facilitate an aural perception awareness of various social-cultural environments.

They use radios as instruments, stitch collective conductive maps of female sound makers, built FM and crystal (and dress) transmitters with kids and adults, speak two languages and try to get their amateur radio licence.

They sing loud with the wind, feet in the ground of sand and ears in the ocean of air : they are radio.

Sisters Akousmatica recently wrote a book called SK, used as a score for remote live performances, the first one being awarded the WISWOS commission for the International Women’s Day event, Celebrating Women in Sound in 2018, at the Goldsmiths University, London.

Set up on the longest possible terrestrial journey between shortwave radio stations, SK  is a meta-fictive vehicle for re-examining the role of women and non-binary people in radio and sound art, through phenomenon of anonymous/clandestine radio broadcast, explored broadly through The Silent Key which uses other events and projects as an interrogative, parasitical way of creating and collecting content. 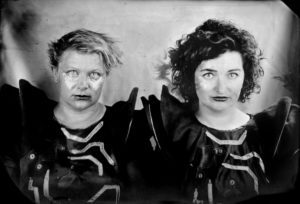